A sad update, Jim Kingshott has died. The details below were from German tool maker Dick GmbH's site:

They have since removed the page this was from.

I had a single email correpondence with Mr. Kingshott. He knew of this site and of my appreciation of his work.
I'd like to think he's with his son now and that his work lives on here and through his books and videos. (The dediction to Making and Modification says simply To my son John whose untimely death brought this book into being)

Important update: Some time ago some of Jim Kingshott's grandson's tools have been stolen. Details here Sadly, the tools are probably long... 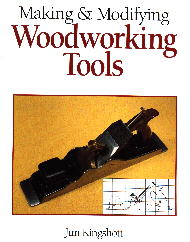 This page is intended to point out irregularities in Jim Kingshott's book
Making and Modifying Woodworking Tools; Guild of Master Craftsman Publications, Ltd.; ISBN 0-946819-32-7 Also listed here are his other books and videos and where they can be found.

While generally very useful, there are several mistakes/omissions in Jim Kingshott's book Hopefully people who find this page won't have to discover these problems the hard way: Other things to check out: Pattern Making
by Russ Allen

Update April 16, 2002
I have made the mitre gauge pattern and core box as promised below. The full story and more importantly the pictures can be found here.

Chapter 7 is devoted to pattern making - a full four pages with pictures. I was greatly confused by the pattern and core box as shown on page 63. I have read quite a few pattern making books and still it took me a long time to figure out what was going on. I'm thinking of making the pattern and core box. If I do, I'll take some photographs to illustrate what I'll try to explain here: The pattern and core box don't work together directly. If the core box was not painted with the picture of the pattern (and/or casting) I would have been less confused. Here's what happens at the foundry: the pattern would be rammed in moulding sand. It would be withdrawn leaving a void that looks exactly like the pattern. The core box would be rammed with sand forming a prism shape. This would be withdrawn from the core box and placed in the void left when the pattern was withdrawn. Now when molten metal is feed into the sand, it flows into the remaining void. When the metal cools, the result is the casting shown in Fig 7.3 (right) at the top of page 63. Pretty simple/standard pattern making practice that is not explained in the text. The text also does not give any dimensions. I've been looking for a Preston mitre gage to base my pattern and core box on.

Shooting Board Plane
by Russ Allen

I built the pattern for his shooting board plane- similar to a Stanley #51. I noticed the following: The plane is pictured on the following pages: 64, 121, 124, 126 and the first and fourth color page (past page 121).
This plane and its pattern make a brief appearence in Mr. Kingshott's Special Planes video!
Infill Plane
by Mike Lindgren
I don't think that the Kingshott book is all that great. I bought it when I was first thinking about making an infill, and reading the dovetailed steel chapter carefully really gave me heartburn. It does have nice pictures, and some good tips, so if you don't have access to the real thing it helps to see what they look like. I got email from a fellow in australia who has made several, and his (approximate) remark was "I am sure glad I made some before I bought kingshotts book" This list is one I have compliled while making a panel plane, then added to as I learned more. It is possible I missed some things in his book(that I complain about), or maybe they are obvious to someone brighter than me. If so, my apologies.

My list of errors/ommisions, etc.: In the end, a book like Whelans on wooden planes just seemed much better done from a standpoint of actually building a plane using several different methods, appropriate to different skill levels.

I have to agree that the Kingshott book isn't perfect, but is there a substitute? The one thing I have to say is that one should make a scale/full size drawing of any such project. I made a shoulder plane using kingshotts methods, and I have to admit that its faults are mostly due to my inability to file a perfect dovetail. As my peening has improved his methods aren't as scary. I find point number 4 from Mike Lindgren's comments to be a little misleading. The dovetails on both the sole and the sides _must_ be proud because both are compound dovetails, to be peened over. If only you could cover up your inadequate dovetail work in wood as easily!

I disagree w/ Mikes point #7, there are drawings of lever caps in the book. Otherwise, I agree with Mike 100%. Particularly, I think the section on peening the dovetails could have used a few more pictures.

Finally, my advice to anyone who has the book, and hasn't made any planes, is go get some metal and make a plane that you don't mind throwing away if you goof up. Do a little engineering on your own, and figure out what you have to have and what you don't. For example, adjusters can be added later.


Shooting Board Parts
by Rob Kempinski

I noticed on your home page, you asked for people to contribute problems they notice with the Kingshott's book. Well his drawing for the 52 steel board doesn't match the photographs of it. The drawing shows a rectangular plate. The photos show the corner by the quadrant rounded more like the original shooting board. BTW Kingshott has another book out called the Work Shop. It has a couple of photos of his 51/52.

His quadrant drawing has a slight error in it . The intersection of the two arc-ed pieces (one arc piece is where he engraved his name and the other has the engraved numbers) shows up as a line in the plan view. By studying the photographs and the other drawings there appears to be no change in height at the spot so the line at that intersection should not be there.

I think some of the comments made by Mike Lindgren about Jim Kingshott's book are a little unfair, particularly about the lever caps. The diagrams & photos clearly show the method of fitting which requires the lever cap to be full width. Having never made dovetails in metal I can't comment on the merits of peening both tails and pins, but I thought Mr Kingshott's description of the method was clear enough, albeit lacking some of the quantitative information the critics require. In his defence Kingshott does urge the reader to make a test dovetail before attempting a plane. This seems sensible. I would not attempt constructing a dining room suite until I'd mastered the basic hand tool techniques.

I had the opportunity to handle Kingshott's planes at the London International Woodwork show a year or two back. They are flawless. The dovetails & riveting are invisible, the wooden infill is fitted and polished to perfection and the 30in jointer plane is awe inspiring - and damned heavy! This man really does know his stuff. Maybe a second edition of the book could iron out some of the issues you & your contributers highlight.

Finally, Kingshott's email address can be found in any recent edition of Traditional Woodworking Magazine - I'm sure he'd be willing to discuss the issues raised on your website.


Other Books by Jim Kingshott Mr. Kingshott's videos: Sources: (I am not affilated with any of the following businesses except as noted. )
It looks like this list below needs to be updated?

New! (November 2007) Fox Chapel Publishing has the first four titles as DVD's!!! They also have videos 3 and 4 though they cost more than the dvd versions.

Tapes 1-4 are availalbe in PAL format from:


Other things to check out:

Back to my home page next